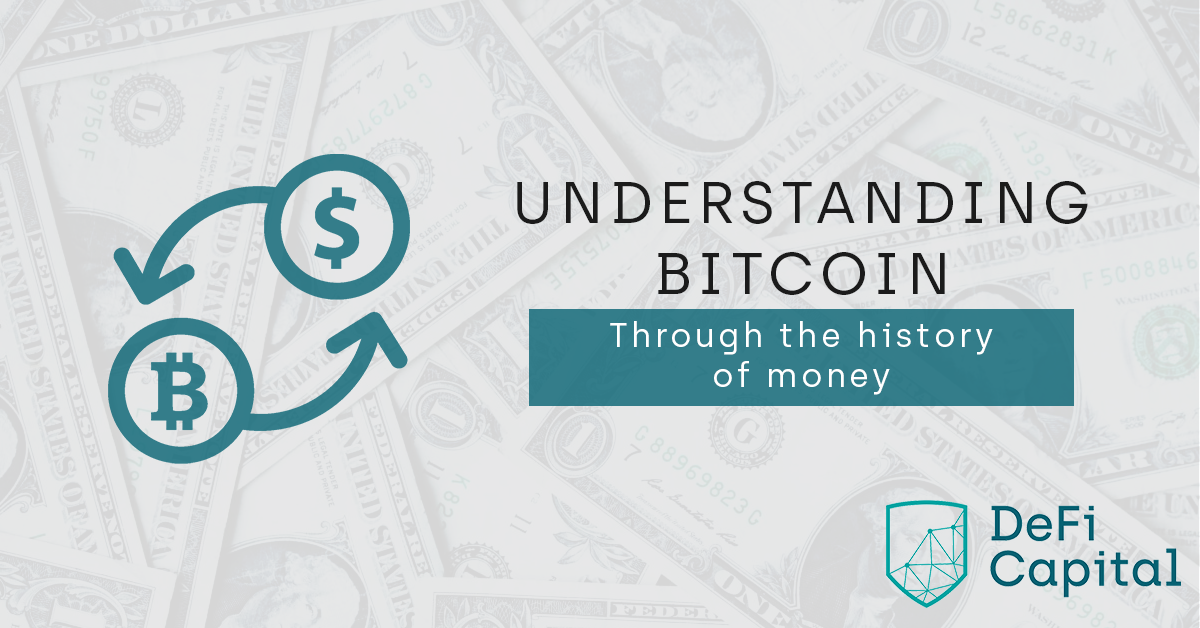 Understanding Bitcoin through
the history of money

If you are reading this, you have obviously heard of Bitcoin. Hearing about it wasn’t so difficult but understanding it can be a bit overwhelming in the beginning. Don’t worry, it’s not you, it’s Bitcoin. It is actually quite a lot to take in: cryptography, blockchain, internet money, consensus, volatility.. and that’s just scratching the surface. It’s not easy to grasp and even for most financial professionals it often takes years to fully understand the complexities of Bitcoin.

In this article, we will dive into the concept of money, where it has come from, and where it is going. This will function as a great introduction to the importance and necessity of a protocol such as Bitcoin. It allows you to see the bigger picture while getting familiar with the more difficult concepts surrounding Bitcoin.

Money, what is it good for?

What even is money? The euro’s or dollars in your wallet or bank account? That is the money we currently use, but it’s not really the right answer. Nature doesn’t have money. We created it to efficiently exchange goods, services and value.

Before money existed, people that produced goods needed to trade their goods for other goods in order to get the products they didn’t produce themselves. A lumberman exchanging his wood for fish. But sometimes the fisherman doesn’t want or need wood, which complicates matters. So we created a new concept; money, a middleman between exchanging parties. It’s a specific good that all other goods go through to be able to exchange value with other people.

Like we discussed in our previous article, money is a tool. A very useful tool to communicate and exchange value. We also explained how money is like a protocol. A protocol is a set of rules that are agreed upon by all its users. It only works when we all agree on the thing that is used as money.

Does this mean that money can be chosen arbitrarily? History has shown us this isn’t the case. You can make your own money, but that doesn’t mean that everyone else has to use or accept it. As explained, it needs to be something we all agree on. We need to choose the money we use. Some things work better as money than others, think of a precious metal like silver versus something like seashells. Both of which have been used as money in the past, but neither of them has retained this role.

From a practical standpoint, what we use as money can’t be something that degrades with time, like grapes that expire. At the same time, it also can’t be something that is easily produced, because that would make it lose its value as there needs to be some form of scarcity. Scarcity is what gives it a sense of desirability, in comparison to dirt for example (unless you live in Waterworld).

Money needs to be easily divisible and a clear unit of account. In addition to this, money needs to be fungible, which means that individual units need to be interchangeable and indistinguishable from another. Think of something like seashells, where every shell could be larger or different looking, resulting in uncertainty in terms of its value. Is the bigger shell worth more than the smaller one? The grey one less scarce than the silver one?

What did we “choose”?

In our history, humans have used many things to barter and trade. Around 5,000 years ago some of the first forms of currency were created from golden, silver, or copper coins. The term “ precious metals” comes from its inherent value and scarcity. This was a rational choice because they could be easily melted into a standardized weight and design.

Gold has most of the qualities mentioned above and was the best form of money we could find for a very long time. But it also came with its own flaws, like the effort it takes to move a large amount of gold due to its weight, or the effort it takes to verify its authenticity. Therefore paper money was first introduced in 11th century China during the Song Dynasty and later made its way to Europe to make it easier for merchants to trade.

Governments and banks backed the value of this paper money with precious metals, which they stored in their vault. The paper was actually more of an IOY (I owe you), representing the underlying value of the gold or silver. These papers could be easily redeemed for precious metals at a bank, allowing people the ease of trading paper currency while retaining the financial security and quality of the underlying metal.

In the early 1900s, the US Dollar rose to prominence and after World War I became accepted as the global reserve currency (Bretton Woods Agreement and System). This was due to the fact that their economy remained largely untouched and it was backed by more gold per dollar than any other major currency at the time. This backing of currencies with precious metals was common until 1971 when United States President, Richard Nixon, passed a law stating that the US Dollar no longer needed to be backed by gold.

This changed the game. This decision changed the dollar, the world reserve currency, from a representative form of money to an actual unbacked “fiat currency”.

As mentioned in our previous article, we currently live in a world dictated by Keynesian economics. This has led to excessive central bank money printing (or Quantitative Easing), which are uncharted waters in economic terms. Fiat that isn’t backed by anything intrinsic (which has been tried before throughout history), have always at some point fallen victim to higher levels of inflation. Since there are no limits to how much of the currency can be created, your money is worthless over time due to the continuous “printing”.

Governments and central banks are aware of the inflationary nature of fiat currencies and have developed methods for limiting how quickly the currency depreciates. Keynsians call this “responsibly” inflating the money supply, and we as a society accepted this as the new normal. The people didn’t have much say in this decision, there was no vote or election for those managing our money. Because money has become such an abstract concept, many don’t even think about it.

Nevertheless, the record amount of money that has been printed over the past decades, first to bail out the global financial system during the 2008 financial crisis, and now again to support the global economy in response to the COVID epidemic in 2020, resulted in a growing number of people that are starting to question how long this system can continue. When does it stop being responsible? If money can keep being printed at will, will there be a tipping point where the value has diminished so much, that we lose confidence in it? And when we say value, we already mean a fiat currency with no intrinsic backing, supporting the global financial system.

Gresham’s law is a monetary principle stating that “bad money drives out good”. People will spend the bad money and hoard the good money. As mentioned earlier, gold has almost all the right characteristics and for a very long time standing on top of the money pyramid. This resulted in a situation where the banks held all the gold (because we gave it to them) and we received fiat in return. Now the banks have control over the “real” money, which has led to a massive centralization of gold and power in the banking structure that we see today.

History has shown that the ability to print money is a weapon of mass destruction. But due to the many temptations, people face while deciding our monetary policy, printing is often chosen as the solution when given this ability. So the world needed something that no one controls.

When we imagine how money should be today, a few things could directly come to mind:

Instead, it should be a completely decentralized, digitally-native currency, unsusceptible to inflation and therefore holding its value over longer periods of time.

For a very long time, we had no choice but to agree with the current status quo. Until someone (or group of developers) under the pseudonymous name, Satoshi Nakamoto created Bitcoin in 2008. It was a direct response to the excessive printing of the central bank during the 2008 financial crisis.

It started out as more of an online experiment to create a digital currency with a limited supply, like gold, whose value could not be diluted by central banks or governments. Bitcoins 21 million supply cap, is one of its key anti-inflation features, which is set in stone code. This makes Bitcoin an ultimate store-of-value, as we know first-hand how much will be created. Based on this metric it’s an even better store-of-value asset than gold as Bitcoin’s supply is “finite,” whereas gold’s supply is simply “limited”.

As can be expected, Bitcoins’ early days were very turbulent. But against all odds, Bitcoin worked and continues to work today. More people are starting to recognize Bitcoin’s potential. A network that protects and preserves the accuracy of all its transactions and therefore, Bitcoin itself as a form of currency and store of value.

Over the past 12 years, Bitcoin has grown immensely:

The internet is one the strongest tools for autonomy, by placing the ability to access and sharing information into the hands of everybody. Bitcoin, and the blockchain technology it pioneered, are doing the same for money, by allowing people to become financially autonomous again. Instead of Dollars being a top-down system (Cantillon effect), Bitcoin and Ethereum are bottom-up systems where everybody can participate by mining or staking. Central banks print money for political, economic, or whatever reason they seem fit. Bitcoin and Ethereum only issue coins for the security of the network, which is completely pre-defined instead of arbitrarily chosen by bankers.

We are in this together

Everybody is facing this same financial problem, especially companies, often with huge cash reserves. So instead of holding that money in US Dollars, Microstrategy, a major tech company decided in August of 2020 to allocate $450 million of their treasury reserves to Bitcoin.

In a press release, their CEO effectively described the rationale for doing so; “We find the global acceptance, brand recognition, ecosystem vitality, network dominance, architectural resilience, technical utility, and community ethos of Bitcoin to be persuasive evidence of its superiority as an asset class for those seeking a long-term store of value. Bitcoin is digital gold — harder, stronger, faster, and smarter than the money that has preceded it.”

Other companies are looking to follow suit, as even Tesla is joining the fray with a $1.5 billion investment into Bitcoin. Some argue that, while it might sound nice, Bitcoin is still in its infancy and therefore carries a lot of risks. We hope that after reading this article you might agree that our current option in holding dollars or euros, also comes with its own risks.

The record levels of central bank printing around the world make Bitcoin’s future looks very promising. For people who have been following Bitcoin for more than 10 years, it might seem as if it has been around for a while now. But most people only started looking at (let alone understanding) Bitcoin in the last couple of years.

If you have to ask who’s time is over and who’s time is just beginning, our answers are clear. Bitcoin is here to stay and DeFi Capital is here to help you stay with it. Now you know understand the WHY, get in touch and find out the HOW.

1 July 2020 Why Bitcoin and Ethereum are 70% of our investment portfolio Read More
We use cookies to ensure that we give you the best experience on our website. If you continue to use this site we will assume that you are happy with it.Ok!Privacy policy